Black Adam has to be the first superhero movie that apologizes for the mind numbingly stupid two hours you just endured, by offering up an enticing ninety second end credits scene.  That’s all that this headache inducing piece of noise has going for it; the end credit scene.  The film is so headache inducing that I’d rather be serenaded with a duet performance of a car alarm and a leaf blower singing a rendition of a song I’ve always despised, like Red, Red Wine.

About twenty minutes into Dwayne Johnson’s debut into the DC Cinematic Universe, as the title character, I reflected on Raiders Of The Lost Ark from 1981.  Remember when the government suits ask Indiana Jones about the significance of the Ark Of The Covenant?  It took three minutes to sum up what was at stake, what the hero was going after and who he was expected to be up against.  That’s it.  After that, the piece was constructed to offer up one kind of stunt or action sequence or visual effect after another.  The difference is that everything you saw served its story and thus carried on the pursuit. How I long for the days of intelligent writing.

Black Adam tries at least three times over the course of two hours to explain brainless conjecture about an ancient city where its inhabitants dig for some powerful element, called Eternium, at the behest of their harsh ruler.  Then there’s something about a crown and a slave boy who comes into play.  Later, I think his father is mentioned, but I was nodding off by then.  I’m only mad at myself for focusing more on inhaling the contents of my popcorn bucket rather than getting invested in a movie.  My mission was no longer to maintain an interest in this big budget comic book tripe.  Now, I was destined to get to the bottom of my overly priced snack food container.  This is not why I go to the movies, people!

When the movie is not talking (which hardly ever happens), it is pounding at my cranium with horrible CGI dust clouds and lightning bolts that offer up blindingly, irritating sights and bombastic sounds.  My eyes hurt.  My ears hurt.  Light a firecracker, drop it in a tuba and blow.  It’s likely more soothing to the senses.  For surround sound, turn on your garbage disposal with your car keys in it.  It’ll all be much more harmonious and pleasant.

What little I know of Black Adam is limited to a scant few comic book images.  Long before I knew of Dwayne Johnson, it seemed inevitable that only this guy could play the part.  It’s an uncanny resemblance.  No one else can play this role.  The supporting cast is promising, especially a sophisticated and well-aged Pierce Brosnan as the one with sorcerer like powers.  His Dr. Fate is maybe DC’s equivalent to Marvel’s Dr. Strange.  Aldis Hodge is Hawkman, and he looks absolutely confident in the guise with outspread bird wings and a kick ass helmet and spiked ball on a staff for a personal weapon.  A guy named Noah Centineo is the Atom Smasher.  He’s cute enough to fill the void for Ezra Miller when he eventually gets fired from his cushy gig as the Flash.

So, I don’t get it.  Warner Bros and DC assemble a terrifically talented cast who not only look good in the costumes, but can act with timing as well. Yet, they give them nothing to do but be digitized in terrible CGI that makes the Hanna Barbera Superfriends cartoons look like breakthrough technology.  Everything looks terribly animated in Black Adam, and therefore it’s as boring as a church sermon that won’t end because the minister is overindulging in chastising you for cheating on your diet.  Johnson on the big screen flying up to the top of a towering monument looks ridiculous, like an ¾ inch action figure next to a life size kitchen refrigerator.  I’m supposed to believe that’s Dwayne Johnson up there?  Probably because Johnson was not in the image, or if he was there, he had no concept what he was supposed to be looking at.  Captions like this happen multiple times here, but they are all devoid of emotion or depth.  The statue itself looks unfinished by the effects wizards.  There’s hardly any detail to it. What’s it supposed to signify?  I completely bought it when Christopher Reeve flew against the skyscrapers of Metropolis way back when.  In today’s age of films, this movie takes about a hundred steps back in progress.  Everything looks artificial.  Nothing looks convincing.

Black Adam is also unsure of a well contained story.  I’ll take no issue with the movie being episodic if that’s what its intention was meant to be.  First the main character is fighting a military that stems from I don’t know what organization or country.  They fire rockets and machine guns at him.  Does nothing.  So, what do I care?  Then he’s fighting the other super heroes in the picture.  They pound each other into the desert streets and dust clouds heighten into the earth.  What’s to be gained from any of that? Black Adam then fights a gang that looks no more threatening than a lame motorcycle posse.  Eventually, he’s battling some kind of CGI devil monster who needs a cough drop.  This guy mustn’t sit on the throne located at the top peak over the city.  If he does, all hell breaks loose and blah, blah, blah.  This is like watching a lame CW TV series crammed into two long tortuous hours.  How does this movie go from here to there and then over there and end up wherever?  I gave up trying to string it all together.

It’s ridiculous how dumb Black Adam is, especially when you consider how much thought went into a ninety second epilogue teaser before you leave the theatre.  I’m sorry but I expect these filmmakers and studios who harbor these big budgets and hype to work on the same level of imagination and craft as a Steven Spielberg or a Christopher Nolan.  Nolan reinvented the Batman franchise.  He took his time to flesh out character motivation while painting a scenery for his own flavor of Gotham City.  Marvel did this as well when Jon Favreau was wise enough to follow a Spielbergian trajectory with the original Iron Man.  Kevin Feige often has not broken the formula since, because it succeeds.  Black Adam neglects all of these techniques.  Its lack of any quality is traitorous towards its consumers.

I don’t recall a conversation among the characters that lasts longer than four sentences.  By the end of the film, I’m not sure if Black Adam is a bad guy or a good guy.  I don’t know what was resolved to tie up the picture.  I don’t know when the turning point occurred, and Black Adam got an upper hand over anyone he does battle with.  Actually, he’s never challenged or weakened.  So, where’s the suspense?  What stakes are at play?

Black Adam functions as an eight-year-old kid in his room with his toy action figures.  They crash into another and the child makes a “pshoosh!” sound with his duck face lips.  I expect eight-year-olds to just enjoy their play things.  They don’t have to focus on exposition for themselves or anyone else.  Let them escape.  However, I didn’t pay to watch an eight-year-old play on the floor with his toys.

The failure of this movie is inexcusable.  It angers me that filmmakers with unlimited resources and a wealth of source material are not trying harder like some of their industry peers.  It’s unfair to movie goers to pay for junk primarily assembled on a Dell computer with a wireless mouse.  Coloring books have more texture than this finished product.

Black Adam is a treachery in any context of the word, filmmaking.  It’s not art.  It’s not fun.  It’s nothing more than shit turned white.  It’s not fresh shit.  It’s worse.  It’s rotten shit. 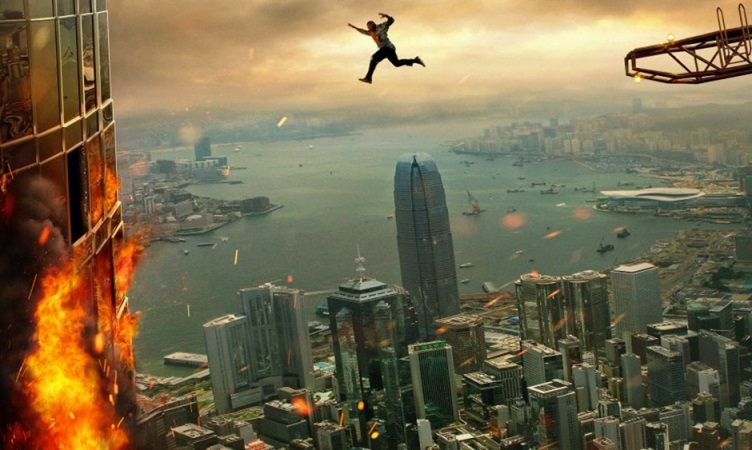 Dwayne “The Rock” Johnson helms a film stuffed with beefcake, gusto, an artificial leg, and LOTS OF DUCT TAPE. Even his world-famous chest tattoo makes a cameo.

Skyscraper is his latest action piece, and it makes no bones about how absurd its set pieces and stunts are.  This is a self-aware picture; self-aware of all its UN-likelihood.  It has to be.

The writer of this piece, that is not a Die Hard ripoff, is Rawson Marshall Thurber (rolls off the tongue like Spielberg, Coppola and Scorsese) is also the director.  I can almost promise this guy wrote this script in airport terminals and secluded library corners with his iPad knowing how out of control this hostage/burning building film would be and just laughed hysterically, like a mad scientist, as he typed.  Heck, he probably took his old GI Joes out of the shoe box and used them to storyboard on the tall oak tree in his backyard.  This guy should be given all jobs first considered for Michael Bay.  He knows the audience will roll their eyes at everything they are seeing, and he goes even crazier with the next set piece.

MILD SPOILER ALERT IF YOU HAVE NOT SEEN THE TRAILERS:

It’s not enough that Johnson, with an artificial leg, can climb a sky high crane while a skyscraper (hence the title) blazes to pieces next to him.  He then makes a ridiculous leap from said crane to said skyscraper through a broken window.  What?!?!? It could happen!!!!! Same as you can put sticky duct tape on your hands and shoes, and climb the outside of the building with the same artificial leg, like Spider-Man.

So, what do you think reader? Did I like Skyscraper?  You bet I did.  The edits are sharp.  I know The Rock isn’t going to perish, but when his hand slips from a ledge, you bet I jumped.  I laughed with such glee at each moment of ridiculous suspense. I loved the badassery of Neve Campbell playing the reverse of a distressed damsel wife to Johnson.

On top of all that, this skyscraper, located in Hong Kong, and reportedly 5 times the size of the Empire State Building, is a gargantuan setting of the best technology.  Known as The Pearl, this is one super cool building of over 220 floors plus a fun house hall of mirrors dome at the top.  How that dome helps the world or even just the building beats the hell outta me.  It’s just amazingly cool and that’s why it’s there.

So yes!!!!  Go see Skyscraper. Throw your logic and snobby intolerance for the absurd off the roof and have a great time at the movies.