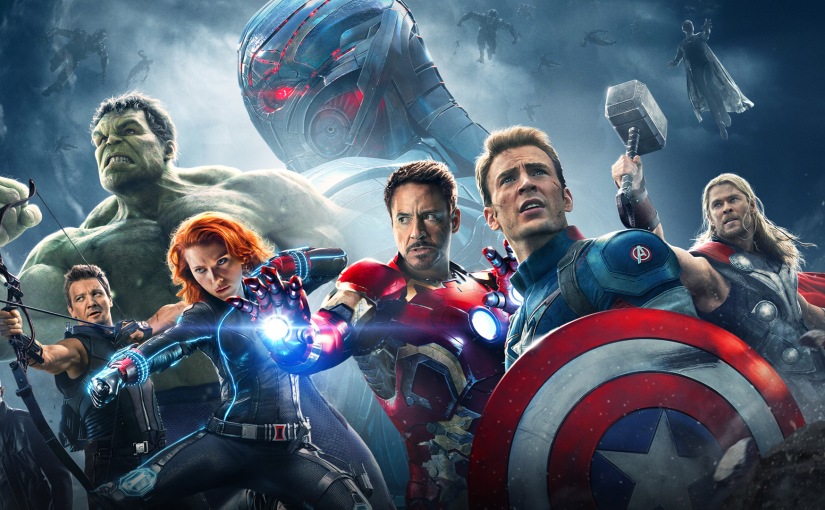 The character of Ultron, a terrorizing cyborg, has been a favorite Marvel Comics villain of mine ever since I discovered him in 1984 during the Secret Wars 12 issue limited run. He looked sinister with a devilish face in the shape of a metallic claw. His sonic blasts appeared more destructive than anything else ever drawn on the page. Ultron was a badass!!! (“Language!”). That being said, the cinematic interpretation is quite different, yet he’s modeled on a much more grown up sculpt.

Ultron is still a terrorist bent on utter destruction, but now he has a disregard for man. He’s written quite inventively as a direct contradiction to arguably the favorite of all the Marvel cinematic characters, Iron Man aka Tony Stark. How fitting that James Spader is cast opposite his former brat pack cast mate (Less Than Zero), Robert Downey, Jr. It is really uncanny how the dialect of Spader’s limitless Ultron can sound just like Downey’s genius Stark but with a means of annihilation; “All of you against all of me.” Ultron is smart first, powerful second. He’s not just a monochromatic android. There’s a means to his end and an inventive science to his purpose; uproot a country high in the sky and then DROP IT BACK DOWN INTO THE PLANET, like an anvil flattening Wile E. Coyote. It’s actually more novel than I’m giving it credit for.

Most Marvel afficianados from the blogs, and fellow colleagues as well, do not care much for this chapter in the MCU. I have yet to understand why. Again, each character is really drawn out beautifully by Joss Whedon with a respective storyline. Finally, Jeremy Renner’s Hawkeye is given some oomph to his back story. So is Paul Bettany as the other cyborg, Vision, formerly J.A.R.V.I.S, the artificial intelligence.

Vision/J.A.R.V.I.S. outshines Data (“Star Trek: TNG,” apologies to my friend, Jim Johnson), but will never top C-3PO. I like how he’s introduced as an amalgamation of all of the film’s main characters’ abilities. Bruce Banner and Tony Stark, Thor, Ultron, Scarlet Witch, some brilliant doctor friend, and even the nation of Wakanda. They all have a piece of themselves in Vision. It’s a better story than the comics ever suggested. Maybe I’m biased having grown up on these stories, but the Vision element makes me want to clap every time I see it. So inventive and economically told for a two-hour film with a ginormous cast. Vision’s introduction is one of the best scenes in all of the Marvel Cinematic Universe.

A great device to unhinge most of the Avengers comes through by means of Elizabeth Olsen’s Scarlet Witch (identified as Wanda Maximoff) who cripples them with mind control. How else should a sorceress take out a whole lotta muscle? It works and it gives Olsen conflict to play with. The visual effects surrounding her are also pretty cool. Sure, it might be just some neon red mist, but the cinematography and CGI surrounding her look gorgeous.

It is really admirable what Marvel and Disney have done with the MCU, and especially watching this film. It’s ironic how filmmaker James Cameron made a statement hoping for “Avengers fatigue” so the phenomenon can die down in movie houses, etc. Funny! For me, seeing all of Ultron’s toys and wit seemed to outshine quite a bit of the residuals spawned from Cameron’s Terminator franchise.

Whedon wrote and directed a film with much more intelligence, wit, at least as much action, and threat than I ever got from Cameron’s reputation of clunky dialogue and plot hole time travel storytelling. It would do Mr. Cameron well to maybe not throw stones at the glass Avengers towers. I’m skeptical that his upcoming FOUR Avatar films will carry the smirk inducing cues the MCU has used to its advantage.