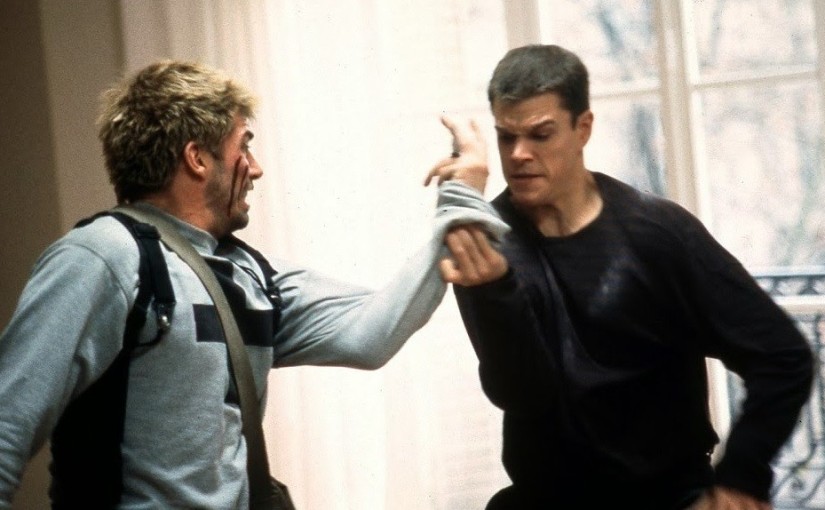 Doug Liman’s The Bourne Identity is the story that occurs after the story, with a compellingly determined performance from its lead Matt Damon.

A man floating in the rain swept Mediterranean Sea is recovered by a fishing boat. Two bullets and a capsule containing a Swiss bank safe deposit box number are removed from his back. The man also has amnesia as he can’t recall his name or background or why any of this has happened. Yet, he does remember his fighting skills, weapon handling (even if it’s a BIC ball point pen) and strategic abilities. Eventually he recovers a lot of cash and passports from the box, but he leaves the gun. (No cannoli to take.)

The agency that does know what happened, code name “Treadstone” developed secretly by the CIA, is represented by a frazzled administrator named Conklin, played well by Chris Cooper. Apparently this mystery man did not carry out an assassination as orchestrated and now this assassin must be located and terminated or Conklin will have a lot of explaining to do to Abbott, another, more calm, authority played by favorite character actor, Brian Cox. However, this mystery man is Jason Bourne, and he is not going to be easy to kill or outsmart by the ones who essentially trained him.

Famke Potente portrays a gypsy that Bourne pays to escort him by car through Europe as he tries to remember and uncover the truth. She’s also very good, as the inevitable brief romance brings just the right dimension to the characters. Now there’s something at stake amid the danger.

There’s not much story to this film. In fact, there’s not much story to the sequels that followed. Liman set the standard for the Bourne films that director Paul Greengrass eventually took over. Just keep the pace at high octane. Crash the cars, break the bones, fire the guns. Only make sure Bourne just gets a cut on the head and recovers with a limp. Nothing more. We know that Bourne will never die. The fun is in how he manages to stay alive following one dangerous encounter after another.

Damon is surprising in this first entry in the series. Perhaps that’s because he’s not a repeat action star like Stallone or Schwarzenegger. He was Good Will Hunting!!!!! So, in this film, he’s got the college prep appearance and walks like a short lightweight boxer. I think that’s great. When we see him disable two policemen early on, it is literally jaw dropping. Liman presents the unexpected in Damon’s performance because the plot can’t offer much more development.

The Bourne films remain as one of the best action series of all time. If anything, I think the taxpayers are getting ripped off by the clandestine shenanigans happening within the CIA. The CIA was meant to be secret. However, “Treadstone” better be MORE secret. That way our secrets can hide our secrets. Right? Wait, what? Forget what I said.

As each movie is happy to demand from an authority in a suit, “Find me Jason Bourne!”

One thought on “THE BOURNE IDENTITY”