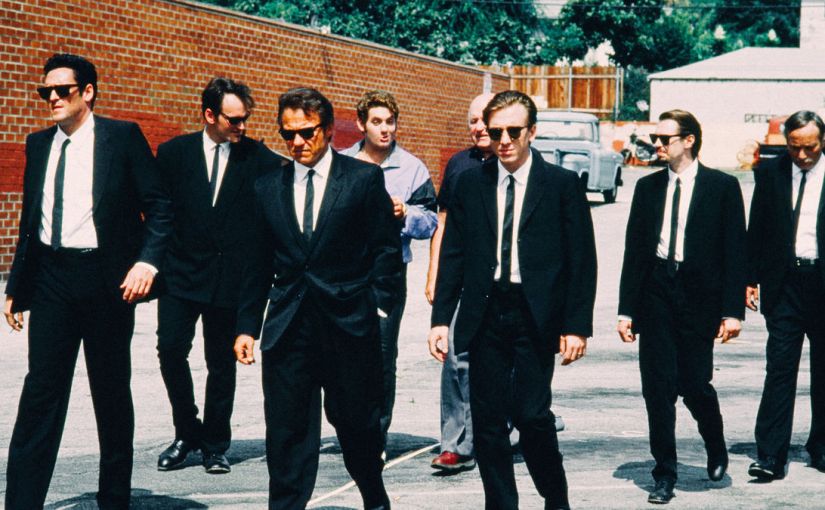 The first time I saw Quentin Tarantino’s Reservoir Dogs, I was flabbergasted by the inventiveness of the twists present within the simplicity of its low budget filmmaking.  As a community theatre actor, I could see there were many moments that were executed as if they were stage performances.  Tarantino just happened to record it all live on camera. Amid the bloody gore, there were some surprises to the script that I never saw coming even if they were plain as day.  Much like The Usual Suspects or The Shawshank Redemption where the unexpected is offered, and it is seemingly obvious despite no signs of early detection, I was entertained.  However, thirty years later, my values have evolved since the release of Tarantino’s first film.  You gotta show me more than just circumstances and contrived set pieces.

As director and writer of the movie, Tarantino plays puppet master to a collection of criminals.  Six of them are dressed uniformly in black suits and ties and they only know one another by a moniker nickname of “Mister” followed by a color.  These are no ordinary criminals though.  Unlike other films, they don’t just talk about the stretch they had in prison or a heist they pulled off at one time.  These guys debate the artistic merits of Madonna’s Like A Virgin and if she went down hill following her True Blue album.  One of them, even has an opinion contrary to the others about tipping a waitress at a diner.  He doesn’t believe in it.  United, the others try to tell him how wrong he is, but he has higher standards for excellence in table service.  It’s deliberately ridiculous!  Clint Eastwood never talked about any of this.  Not even Newman or Redford.  Lee Marvin?  Charles Bronson?  Forget it!  (Jack Nicholson may be the exception in Five Easy Pieces, but that character wasn’t a criminal.) Quentin Tarantino, however, believes that even low-level hoods have a viewpoint on anything from pop culture to societal expectations.

These six guys have been assembled by a kingpin named Joe (Lawrence Tierney) and his husky, bruiser son Nice Guy Eddie (Chris Penn) to carry out a diamond robbery.  The film opens with these conversations over breakfast and then jumps to the aftermath where Mr. Orange (Tim Roth) is bleeding to death in the back seat while Mr. White (Harvey Keitel) is high tailing it away.  When they get to their rendezvous warehouse, eventually Mr. Pink (Steve Buscemi) and Mr. Blonde (Michael Madsen) arrive and the strangers among themselves contemplate if they were set up by one of their own since the police were already waiting for the robbery to take place.  Is one of them a cop or a rat?  Occasionally, Tarantino cuts away from this one warehouse setting to flashback to how some of these guys came to be recruited for the heist.

The scenario of Reservoir Dogs is creative.  It demonstrates that there is no honor among thieves.  Much like Tarantino’s films to come afterwards, his characters are thin and two dimensional.  That works in pictures like Inglorious Basterds and Django Unchained.  Here, I didn’t embrace that aspect.  Reservoir Dogs seems to move in a direction of the Clue board game.  I know nothing about Professor Plum or Colonel Mustard’s history.  I just need to determine if one of them did it with the candlestick in the Billiard Room.  In Tarantino’s film, I just need to put a blindfold on and take a shot in the dark of who the rat among the gang is.  That’s all.  It’s just circumstantial.

I appreciate how unique these criminals are with their mundane conversations and their cool swagger, but there’s nothing much beyond that.  Tarantino might have known that too.  He only has one question to answer before the end of the movie.  In between, to fatten up the length of the film, he incorporates a savage torture scene on a cop that Mr. Blonde takes hostage.  It’s memorable, but what does the scene really serve?  What do I take away from watching Michael Madsen’s cool, strutted character hacking off a man’s ear and dousing him in gasoline, while Stealer Wheel’s Stuck In The Middle With You plays on the radio?

The seeds of Tarantino’s brand were definitely showing in his first film, an independent project that luckily Harvey Keitel had enough faith in to help finance its shoestring budget.  The black suits became usual for Tarantino’s films along with pop rock of the seventies for a soundtrack.  Action scenes of a Lethal Weapon flavor have never been the director’s choice.  Rather, quick shots of gunfire followed by cutaway edits to the next talking scenes are his narrative.   It all shows here.  It just wasn’t as well rounded as it came to be in his seminal film, Pulp Fiction.

The best acting comes from Tim Roth as Mr. Orange.  The character is given a flashback moment for how he’s brought into the gang. It is intriguing enough to be a movie of its own.  I wanted more from this guy’s story, because of Roth’s performance.  As well, for most of the film he’s bleeding his guts out from a gunshot wound in the stomach.  His hysteria is contrary to most other bad guys who get shot in the movies.  Mr. Orange suddenly doesn’t look so tough.  He’s crying like a baby and begs his closest teammate, Mr. White, to drop him off at the hospital.  He even tells Mr. White “God bless you for what you’re doing for me.”  Lee Marvin or Jimmy Cagney would never say that.  For a tough guy low level hood, this is not a cliché gangster who laughs at the face of death.  It’s imagination that thinks outside the box.  Forgive the intended pun, but Mr. Orange may be one of Tarantino’s most colorful characters.  I just wanted more from the guy.

These guys may be intentionally corny in their conversations. They may be super cool with their sunglasses and curse word laced dialogue.  However, that only goes so far before it looks like an ad for the Gap in the 1990s.  Beyond what the film shows with the Mr. Orange character, there had to be more depth.

What Reservoir Dogs lacks turns me towards a mixed review for the film.  Still, I saw the movie before Pulp Fiction ever came out and I recall way back then that this Quentin Tarantino fellow has got something special brewing.  I couldn’t wait to see what was coming next, and I wasn’t disappointed.