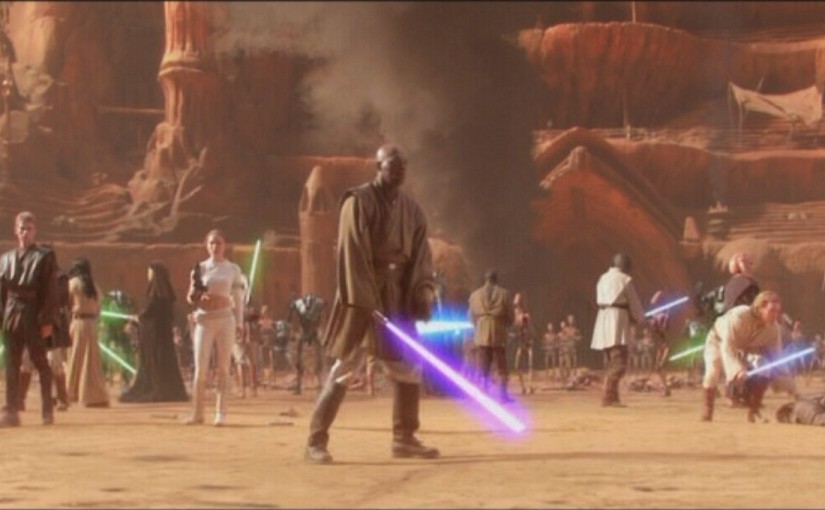 Star Wars Episode II: Attack Of The Clones is a vast improvement on the prior installment of George Lucas’ prequel trilogy from a galaxy far, far away. Lucas made an attempt to bring his characters out of their shell a little bit. I mean at least they laugh among each another. You need that if you are to believe that Jedi In Training Anakin Skywalker and Padme Amidala (Hayden Christensen and Natalie Portman) are to fall madly in love. So at least have them romp around in a Naboo meadow.

There’s some curious political intrigue in Clones; delving deeper than what Episode I only began to imply. As stilted as some of the dialogue may be, there are ingredients here that allow to me correlate with real life government powers and to date current events. That’s a compliment, but it’s also a shortcoming.

Ian McDiarmid remains the MVP of this trilogy as Chancellor Palpatine, the puppet master with a faux innocent exterior. Anytime he’s on screen you sit up in your chair with a little more focus. He’s brilliant as the manipulator who keeps a short distance on Anakin, the supposed chosen one, while also pushing Padme away from government interference, and yet still managing to prevent the Jedi Order from detecting his true nature. It takes a heck of an actor to pull this off.

At the same time though, the politics take up a large amount of the entire trilogy. While it holds my interest, I still question if this is what a Star Wars film should be comprised of. Where’s the force, and where’s a more defined explanation of what “the chosen one” is to offer, or what the “balance of the force” really means? Some heavy vocabulary in this terminology, maybe, but is there any dimension to any of this? Regrettably, the answer is no.

New characters and planets are introduced. Jango Fett (Temura Morrison), an armored bounty hunter, is the initial antagonist who is part of an assassination attempt on Padme, followed by a revelation that he is the source of a new discovered clone army on a secret water planet known as Kamino. (As a diehard franchise fan, I have a lot of issues with Jango and his pre-teen son Boba, but that is for another discussion.)

Eventually, the antagonism shifts to Christopher Lee as the former Jedi Count Dooku, found to be keeping conference on another secret planet known as Geonosis, where life size dragonflies reside. Lee was legendary by the time this film was released in 2002, but he’s not exactly aggressive enough for me. He was an old man with little convincing agility to be engaged in a lightsaber fight with a very bouncy Master Yoda. In Lord Of The Rings, he commanded from the perch of his tower. Here, Lee is in the mix of the action and he’s a far cry from Ray Park’s appearance as Darth Maul.

Yoda is another issue. Now friends will be quick to remind and tease me over how excited I got when I saw Yoda engage in a climactic lightsaber dual for the first time. My tune has changed though. As The Empire Strikes Back showed way back in 1980, Yoda was convincingly powerful without ever having to prove how powerful he ever was. Here, it comes off gimmicky to me as an excuse to draw a crowd or make a new kind of toy to sell. Just Yoda’s appearance alone should be enough. Now, he’s just like the rest of them. Yoda’s greatest feature was his philosophy, never his combat skills.

I don’t take much issue with the romantic dialogue between Anakin and Padmé. An actor like Leonardo DiCaprio or Billy Zane would sell the “sand monologue” into the stratosphere. Remember, those guys performed James Cameron’s hammy Titanic script. Hayden Christensen could not do that though. His temper, which Anakin is regarded for at this age, is never convincing. It’s terribly overacted. He screeches his dialogue. Darth Vader never had to yell or scream or screech. So why is Anakin? This is also partly Lucas’ fault. Where’s the misuse of the force with Anakin? At one moment, Anakin is upset and throws an object? Why throw an object? Why not “force throw” an object? Anakin demands answers from a captive bounty hunter by screaming at her? Why only scream? Why not “force choke her” or mentally torment her? Don’t you think these ideas, these familiarities we’ve seen with Vader would have held much more dramatic weight and depth?

Lucas stretched himself further than he did on The Phantom Menace. Still, he just didn’t take his second episode far enough. It’s as if he opted not to apply too much effort. There are no twists to Attack Of The Clones. No surprises. We easily have a general idea of where all of this is going long before the opening crawl even begins. So, like its predecessor, Episode II lacks a wow factor that placed the original three films into the greatness they still hold.

There still needed to be more in these films. I’m not gonna even talk about CGI. I’m talking about story, and what makes a saga a Saga. So… WHERE’S THE SAGA?????

One thought on “STAR WARS EPISODE II: ATTACK OF THE CLONES”